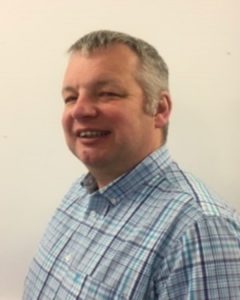 Simon was born in the late 1960s in Southport, Lancashire. He’s had a long career in the retail sector, starting with J Sainsburys PLC, where he stayed until 1999 when he was in the role of Evening Shift Manager. Simon’s retail career continued, first working as a Night Crew Controller, at Safeway PLC and then as an Assistant Manager with E.H. Booths PLC.

During his early working life, Simon showed his commitment to learning by studying at Lancashire Polytechnic, gaining a Higher National Diploma in Business and Finance and a BA Honours Degree in Accounting.

In January 2004, Simon changed direction and joined Preston College. This period of his career spanned more than 15 years. Simon became a fully qualified Assessor, Internal Quality Assurer and a Work-based Tutor, achieving a Professional Graduate Certificate in Education (PGCE) in 2011. Simon supported and mentored apprentices, facilitated their learning and assessed their competency towards qualifications to ensure that they achieved all components of their apprenticeship frameworks, including Functional Skills English, Maths and I.C.T.

Simon became a work-based tutor because he wanted to pass on and make use of the skills learnt in the retail industry. He knew that these skills could help others progress in their careers and improve their quality of life. Being a key part of the learning process of others and watching them grow into their job roles and careers is a rewarding factor which motivates Simon and inspires him every day.

Simon believes that it is important to build rapport with the learners he’s supporting. Rapport puts them at ease, improves their confidence and removes any barriers to their learning. He recalls one occasion when he was observed by an Ofsted Inspector assessing an apprentice in the workplace, during a store refit. It was a proud moment for him when the apprentice was able to demonstrate their competence and ease in the job role and share this with the Inspector.

Simon enjoyed being a key player in planning, preparing and delivering the Aldi Apprenticeship Pilot Scheme, in partnership with the National Skills Academy for Retail and Manchester College. After the success of the trial, the scheme was rolled out nationally. Simon was a finalist for Trainer of the Year and his apprentice, Emma, was a finalist for Apprentice of the Year at the Skillsmart Retail Rising Stars Awards in 2012.

Simon is an organised, hardworking individual. He joined SRSCC in September 2019 as the Course Mentor and Functional Skills Tutor. He is looking forward to working with and supporting others, sharing his knowledge and skills and embracing the changes that make the learning journey rewarding and enjoyable.